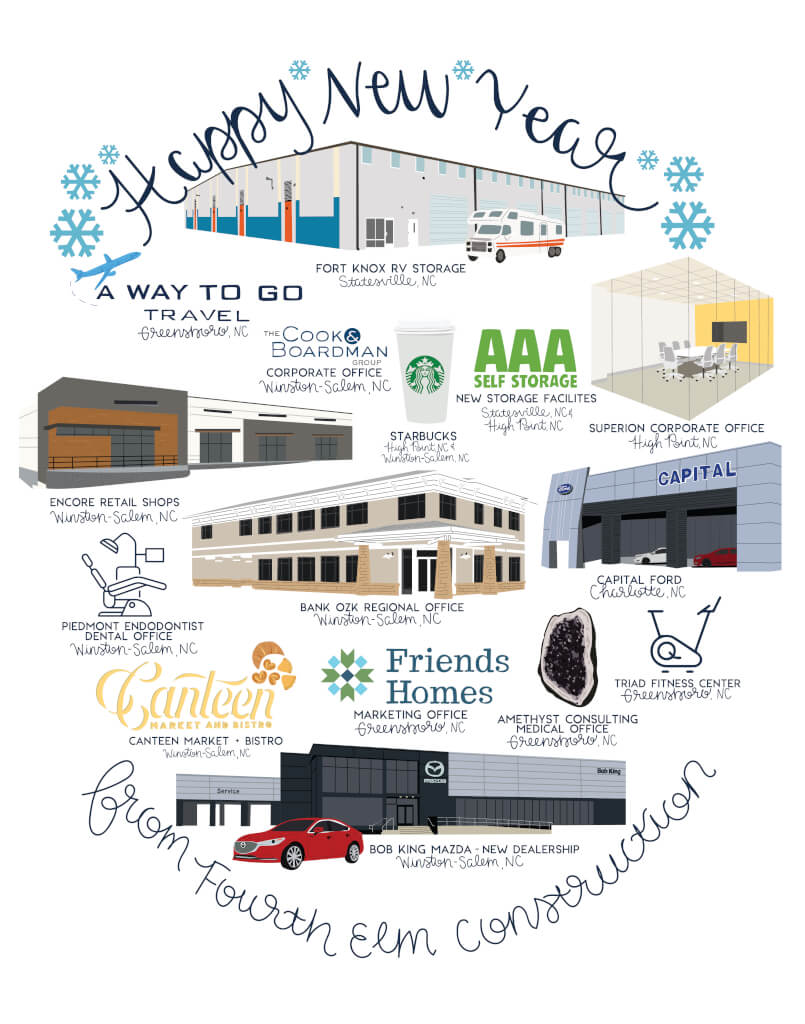 Fourth Elm Construction is grateful for the amazing projects and relationships we made in 2018 and look forward to what 2019 will bring!

Fourth Elm Construction is thrilled to partner with our friends at The Brooks Group to build their new corporate office on the top floor of the 301 N. Elm Tower.

Fourth Elm Construction is very excited to partner with DairiO on their new location in Asheboro. The new restaurant will be located at 527 W. Dixie Drive and is expected to be completed by late summer. Check out the article in the Asheboro Courier-Tribune!

Fourth Elm Construction was thrilled to see our current construction project, Bank OZK in Winston-Salem on the front of the Triad Business Journal. Take a look at the article to see “what lies ahead” for 2019!

Fourth Elm Construction is excited to contribute to Piedmont Federal Saving Bank’s growing presence in the Triad. A new, 3,200 sf bank branch is under construction in High Point with an anticipated opening in May 2019.

Check out the article in the Triad Business Journal!

Bank OZK (previously Bank of the Ozarks) is building a two-story, 10,300 SF branch on Hanes Mall Boulevard in Winston-Salem. In 2015 Bank OZK entered the market with the purchase of Mocksville-based Bank of the Carolinas. The new branch will have modern frameless glass partitions, energy efficient windows and LED lighting. More on this story can be found on the Triad Business Journal.

Building products provider Cook and Boardman will increase its current office space from 5,000 SF to 15,585. The company simply “ran out of room” and will move from their current Westpoint Boulevard location to the Salem Creek Business Park in Winston-Salem. Because of Cook and Boardman’s “premier presence as a longtime and respected supplier in the construction industry, (Fourth Elm was) honored to be chosen and to work as their general contractor for their new corporate office.” More on this story can be found on the Triad Business Journal.

A new retail building is under construction next to an existing building being renovated in a high-traffic Triad location circled by roads.

Greenwood & Charles of Winston-Salem is developing a new retail building in Kernersville on the round-about across from the new Lowes Food store on Market View Drive. Meanwhile, the developer is renovating in existing building with a South Main Street address that will become a Mattress Warehouse store.

Ladd Freeman of Freeman Commercial Real Estate told Triad Business Journal that the developer is referring to the project as “Market View Center,” though an official name is not planned. The two buildings will be surrounded by parking in the circle, which is bordered by South Main, Old Winston Road and Market View Drive. The buildings will be accessed by two entrances on Market View and another on Old Winston.

The project architect is Peterson-Gordon Architects of Winston-Salem. According to Fourth Elm Construction, the general contractor, construction began in May, and completion is scheduled in November.

The new five-tenant building totaling 7,634 square feet will have an all brick exterior with storefront glass and canopies. According to the Freeman Commercial Real Estate website, Mattress Warehouse will be the lone tenant in a renovated 4,772 square foot building on South Main that formerly housed multiple tenants.

Papa John’s Pizza will move from its current spot in the under-renovation Mattress Warehouse store into the new building. The remaining four storefronts in the new building will have 6,223 square feet of space, ranging from about 1,200 square feet to just over 2,000 square feet. Freeman Commercial is offering the space at $26 per square foot with a tenant improvement allowance negotiable.

Freeman said Papa John’s is the only tenant committed to the new building, but he’s gotten several inquiries about the shops.

“We’re really not in a rush,” Freeman told TBJ. “We’re waiting to get something up that we can show people.”

Mattress Warehouse has three stores in Greensboro and one in High Point, but no locations in Forsyth County.

To read more, visit the original story at The Triad Business Journal